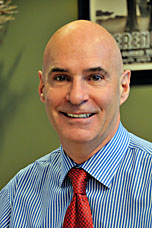 E: proth@mrglawfirm.com
T: 828.281.2100 ext. 203
"Courtrooms are the places in which the conequences of human behavior, its abuses, its thoughtfulness, its thoughtlessness, its mendacity, its honesty, its good and its evil are made plain, understood and addressed. The ground around the great and small is made level (more or less) by the talent, zeal and commitment of dedicated advocates, and the fair and even application of the rules of engagement, by independent judges. Juries composed of our fellow citizens, examining the evidence, observing the testimony, and hearing the argument, assess, interpret, judge credibility, and render a verdict upon it."

A native of Madison, Wisconsin, Philip received both his undergraduate and law degrees from the University of Wisconsin. He obtained his law degree in 1992 and practiced law in Chicago and later served as a staff attorney to a trade association in Washington, D.C., before moving to Asheville.

His extensive trial practice notwithstanding, Mr. Roth is certified as a Superior Court Mediator and routinely commences the evaluation of a dispute with an analysis of the prospect for early resolution through negotiations and formal settlement conferences.

He is admitted to all courts in North Carolina as well as the United States Supreme Court, the Fourth Circuit Court of Appeals and the Middle and Western Districts for United States District Courts in North Carolina, representing clients at both the trial and appellate levels. Like Mr. Marshall, Philip has extraordianry experience in federal forums.

In 2003 he and Kip Marshall obtained the largest housing discrimination verdict in North Carolina history. In 2012, Mr. Roth obtained a jury verdict on behalf of his client in a civil rights action in excess of one million dollars. His civil rights work has also garnered local, regional and national attention.

Philip has been recognized with distinction by his legal peers. He was first named as a Best Lawyer® in 2021, thereby ranking in the top 4% of all American lawyers.

A frequent faculty member in Continuing Legal Education, Philip teaches civil trial skills and, thanks to his early history with computers, in the emerging practice area of "electronic discovery," providing consultation services in that discipline to other attorneys.

Philip is also active in the community. Among other things, he is a cooperating attorney with the American Civil Liberties Union of North Carolina, and a past president of the Western North Carolina chapter of the American Civil Liberties Union. He has also held leadership positions in the Civil Rights and Employment Sections of the North Carolina Advocates for Justice. Currently, he is a volunteer for the Racial Justice Coalition and a member of the Board of Directors for the Immediate Theatre Project, in Asheville.